Being successful in the rush for development

The company history sounds as sportily ambitious as the passion of its founder: Roman Arnold, avid racing cyclist and owner of a bicycle shop in Coblenz, Germany, founded Canyon Bicycles GmbH in 2001. Since then, racing bikes and mountain bikes in the high-end segment and which set a trend have been created there. Elite athletes achieve victories on Canyon bikes; their look gained them the renowned Design Award of the Federal Republic of Germany. Today, Canyon employs 750 people, is active in Europe, Asia and Australia and is preparing to enter the US market.

All parts of the bicycles are constructed and installed in Coblenz. Canyon uses a CNC 5-axis machining center by machine tool manufacturer HURCO for its prototype production. In 2015, the company made the decision to acquire a first machining center of its own and found the right solution in the HURCO VMX 42 HSRTi.

Canyon also undertook prototype production before, reports Gordon Koenen, Quality Management Director. But it did so with external production partners and that took up a great deal of coordination resources. “Delivery took a long time and there were often misunderstandings – particularly in prototype production – which also involved tuning work,” remembers the manager. Their own machining center now increases flexibility, he continues: “With the machine, we are able to precisely produce small, compact parts. But we can also span an entire frame and have a correspondingly large table in order to perform metal-cutting processing.”

This helps in the race with competition: Those who want to proclaim themselves the technology leader on this competitive market have to be quick in their prototype production, explains Koenen: “We live by our high level of innovation. In order to be able to maintain this level, the outlay is constantly rising.” The bicycle industry, explains Koenen, is very transient and has now reduced down to a rhythm of a year. Time can be squandered in the half to three-quarters of a year of development time that a manufacturer has left. Open-mindedness towards new technologies is therefore a must: “We were the first in the industry to implement a computer tomography for checking carbon components in the sports industry.” 3D printers are also used for prototypes and functional models at Canyon. This, says the quality manager, provides a feel for the respective component in a preliminary stage. For the ultimate test, however, prototypes must be available ─ of this much he is convinced: “The components of the chassis technology are getting more and more complicated. You can calculate everything on the computer, but you can only experience the ride feeling if you move the parts and carry out tests under real conditions.” That’s why, in his opinion, the mechanical manufacture of prototypes definitely remains an important part of his profession.

Koenen is wholeheartedly satisfied with the performance and precision of the HURCO machining center. Furthermore, the prototype production on the machine motivates employees, he reports: “Thanks to the machine, their approach has greatly changed. Staff work with an entirely different speed when they can implement ideas themselves.” Before – when a task had to be awarded externally – there was a certain level of shyness of realizations. Since the machine has been around, it has been used intensively. The development times, says the manager, have greatly reduced overall. “If the capacity and the order position of the machine allow it, we can produce a part by the next day. And we can do so as precisely as we imagine it.” If the task is awarded externally – generally to a supplier in Asia – it can take up to two weeks before the component is returned. This is much too slow for prototype production, especially as changes are often required. 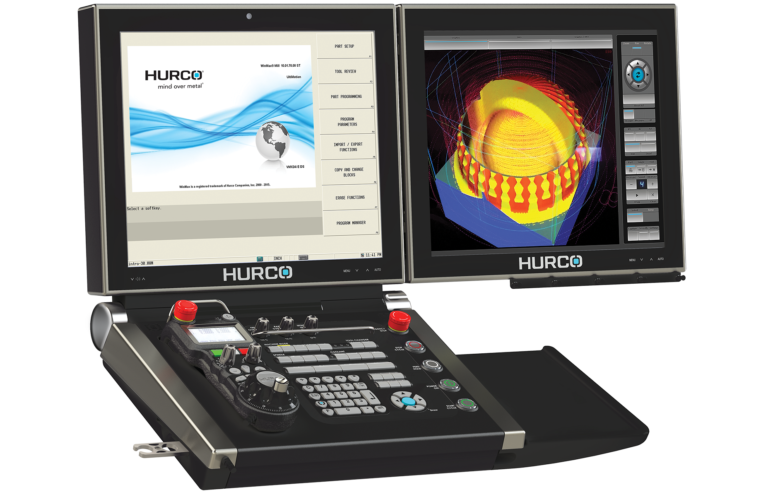 The simple and intuitive operation of the 5-axis machine with dialog programming was a main argument for the purchase decision. Furthermore, a Canyon employee had experience with this type of control system. Koenen: “We see it as a great advantage that you can work not only with CAD CAM, but can also program and control a great deal directly at the machine.” An employee can regenerate an NC program using CAD CAM with the 3 model, while, at the same time, a second employee can program at the machine in conversational operation. Both programs can later be linked with the conversational NC program jump option. 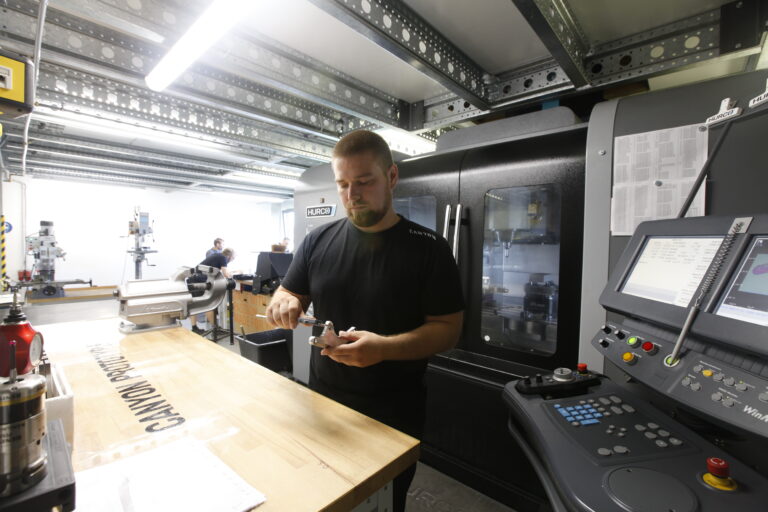 Björn Hartmann from prototype production at Canyon joined the company a year ago. The metal-cutting specialist finds the 5-axis machining with the conversational control system very simple in terms of procedure and concludes: “The HURCO machine is perfect for our components. The positioning of the 5-axis is done by the control system, so not a lot of concentration is required there. We regularly switch between conversational and CAM control systems, and do so directly at the machine.” Working with the CAM system in particular – which he and his colleagues often do, as there are many 3D components – is convincing due to a dynamic axis movement thanks to a dynamically variable block scan of the HURCO control system of up to 10,000 data sets. He finds the time factor impressive: “At my previous employer, we had two machines. Compared to that, the UltiMotion software feature saves a great deal of time. If you work a lot with trochoidal movements, you are around 60 percent faster.”

The conversational control system of the machine fits the technological thinking at Canyon for Gordon Koenen: “Our team very often approaches this system because they can find their way around the menu navigation intuitively and quickly. The entire industry has to allow employees to find their way in new systems as quickly as possible. Long training sessions will become a thing of the past. The technology sector is too fast-paced for that.” 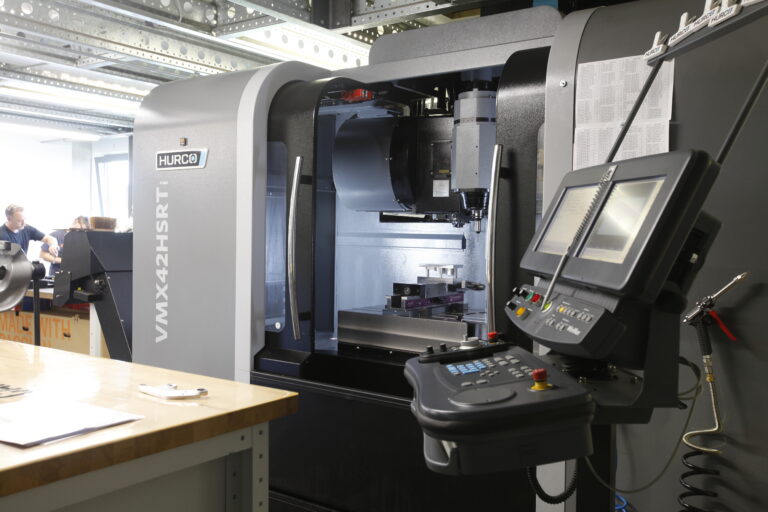 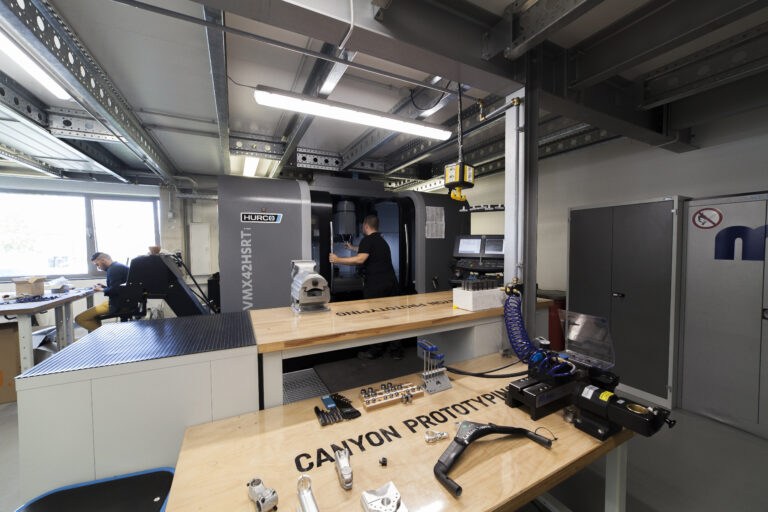 The fast pace of the sector is one thing – personnel policy another. A short training period is important for Canyon as it currently only has two employees responsible for operating the machine. And if one or two further machines were to be added in the future, the operator should be able to be quickly trained there as well. Björn Hartmann is confident: “The control system in the HURCO is self-explanatory and very easy to learn.” Connecting similarities, of this Gordon Koenen is convinced. This also applies to the cooperation with HURCO: “We not only bought the right machine for a good price together with good service, but also go well together in terms of philosophy and company size. Right from the start, we had the impression that there was the same SME approach at HURCO. The chemistry was simply right.”